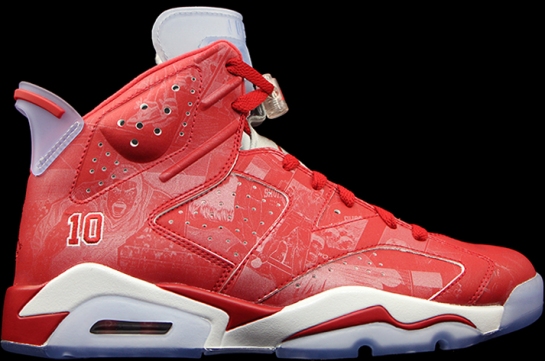 If you’ve been following sneaker news, you might have heard that a few months ago Jordan Brand was putting together something special for Slam Dunk fans! Takehiko Inoue’s classic ’90s basketball manga/anime was a cultural phenomenon for Japan. Much like what Eyeshield 21 did for American Football in Japan, Slam Dunk did the same for professional basketball. Basketball culture and everything that went along with it, was (and still is) in full swing all over Japan. Sneaker culture in particular made a big impression amongst fans of the show. Click below for some background info and some new pics!

The main character (Hanamichi Sakuragi) wore classic white/infrared Air Jordan 6 in his games initially until they wore out. Then he acquired a pair of the original Black/Red Air Jordan 1s. In the classic scene above, you can see a sporting goods shop that specializes in basketball shoes… The worker there reminisces about the time his precious Air Jordan 6s were ‘taken’ away from him and just as he relives the pain, Sakuragi comes back needed a new pair of shoes. lol.

Just today AJSOLE posted some new pictures of the forthcoming Air Jordan 6 – “Slam Dunk” release. You can notice a lot of the cool details including memorable scenes embedded from the manga and main character Sakuragi’s jersey number on the outer heel. This special collaboration project is rumored to be limited and exclusive to Asia markets (including Japan) only! If that’s the case, better start doing some homework now and preparing for it! Click below for more of the pictures!

The views and opinions expressed in this website are those of the authors and do not necessarily reflect the official policy or position of any company mentioned. Examples of opinions performed within this site are only examples. They are not to be taken at face value as they are based only on the mood, limited to that of personal experiences. Assumptions made within the examples are not reflective of the position of MarkMan or any corporate entity.
4 comments