Earlier today, NIKE posted an ‘Inside The Vault’ retrospective on one of their most coveted collaborations, the PlayStation Air Force 1. Within it, they briefly detailed the conceptual process and even teased about the future. It makes you think… can we see a retro release of the original full grain leather design? Either way, let’s take a look at MY story and how I acquired a pair of one of my favorite sneakers of all time…

The Nike PlayStation Air Force 1 was first released in 2006 as a promotional item and joint collaboration between Nike and Sony Computer Entertainment of America. Only 150 pairs were released (individually numbered). The shoe was never sold at retail.

In 2009, Sony reached out to Nike again to produce more of the now coveted sneaker. This time a limited run of 50 pairs(silver boxes) and 40 pairs (black boxes) were made (with slight differences from the 2006 version) and given to Sony employees/executives/media to help celebrate the upcoming 10th anniversary of the PlayStation 2 console.

The legendary Bruce Kilgore (also did the Jordan 2) designed this iconic shoe that continues to impress decades after it first left his lab. Shortly after it was released, the sneaker was actually discontinued due to lack of sales. However in the New York tri-state area, the shoe began to pick up in popularity and was eventually re-released a few years later, and has been a regular ever since.

In case you didn’t know. I like sneakers and video games a lot. I actually work in the gaming industry in product/design and marketing. I look at the sneaker trends & culture with inspiration often when creating products. The result, often times are amazing. 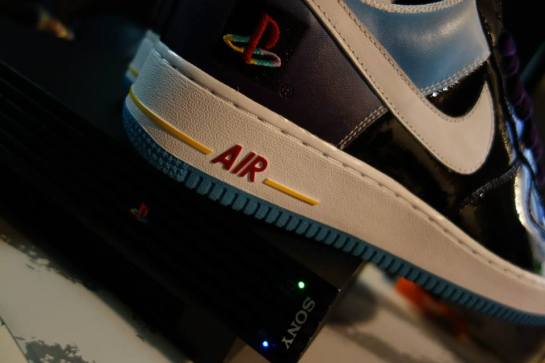 I first saw this shoe in person at E3 2006. It was the same time that I met my good friend Alex Wang, better known to the internet as ‘retrokid.’ Yes, the same ‘retrokid’ that helped launch Sole Collector magazine and one of the true OGs of Nike Talk (NT). He was rocking’ them and we just talked about gaming/sneakers and our passions for both. Since then, I’ve been wanting a pair of these. Finally almost 8 years later, I got ’em! #112 out of 150 to be exact!

I know a lot of people have been asking, ‘how much?’ – I don’t want to say. Just look up the going rate on eBay and other online sneaker retailers, that should give you an idea!

CURRENTLY VIEWING:
– Nothing, please recommend something!